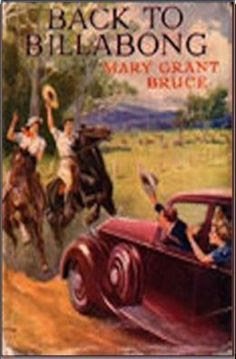 One of the best Australian book series I remember reading as a child was the Billabong series. These days Billabong is the name of a well known clothes line. But back in the 1970s or early 1980s, it was the name of a series of books written by Mary Grant Bruce.

I also remember these books having bright yellow covers. These may have been specifically just for the New Zealand market (Since I was born and raised in New Zealand), because I cannot find any copies of these yellow covered books online at all.

Mary Grant Bruce was born in Australia in 1878 and died in 1958. She wrote a number of children's books but the most well known books is the Billabong series. These books are all about Norah Linton who was born and raised on a cattle ranch (or station as they are called in Australia) in the outback of the state of Victoria in Australia in the early 1900's.

There were a total of 15 books in the series, starting from when Norah was 11 years old, and going through her teenage years, to the years spent in England during World War 1, the return to Australia, Norah's eventual marriage to her brothers best friend and their children.

I happened to find one of these books online so I read it for this classics club. I need to catch up since I am already very far behind on my lists.  I also swapped out one of my books on my list for this one. So any books you see on my list with the strike through line will NOT be read for this challenge, but has been swapped out for another book.

Back to Billabong was published in 1921 and is set in 1919 as the Linton family plus Wally and two  others, return to Australia and the Billabong station after the Armstice. This book starts off with two new characters totally unrelated to the Lintons. We find Cecilia Rainham being employed as an unpaid governess for her younger half siblings by her "wicked" step mother. She does have free room and board and this is more than enough to cover Tommy's employment. This stepmother is referred to as the "she-dragon".

Cecilia and her brother Bob was raised by their maternal aunt after their mother died when the children were very young. They lived in England until their father eventually remarried and the aunt took the children to France.

On this particular day Cecilia, or Tommy as she is usually called, has a date to meet Bob in Hyde Park at 3 pm. Mrs Rainham, the she-dragon step mother, has a meeting set for 4 pm and she uses Tommy to fix her dress, look after the children, take them to their dance class and in general delay Tommy's meeting by any means possible. Tommy is still only 19 and therefore is NOT considered an adult yet. That wont happen until she turns 21.

Tommy has now been used as an unpaid governess for the last 2 years since the war began and she and her brother Robert (Bob) were forced to return to England from France where they were being raised by their maternal aunt. Bob enlisted in the army and so was out of reach, but 17 year old Cecilia who spoke fluent french was perfect to be an unpaid governess for the stepmothers very spoiled children. Their father is a whipped man and escapes to his office in London every day. He is aware that his eldest daughter is being abused and bullied but is unable to do anything since his wife would just refuse to do anything he suggested or demanded.

Eventually Tommy and Bob do meet up and Bob tells Tommy his good news - that he will is to be demobbed (demobilised or discharged) from army service later that month. Finally they can escape. The stepmother has told Tommy that until she is aged 21, her father has control of her and therefore she will be staying at their house and continuing her work as a governess. Bob has no prospects and no job, therefore he has no means of support. This turns out to be a lie.

Having spoken to the lawyer for the aunt's estate, Bob discovers that the aunt left a small legacy for her neice and nephew in the amount of 3000 pounds. Bob has been living and working with a number of Australians during the war, and he has plenty of contacts. An Australian Army General writes some letters of introduction for Bob to move to Australia and start up a new life. The General arranges transport for Bob and his sister in a transport ship named the HMT (His Majesty's transport)
Nauru. The money that the aunt left allows Tommy to escape from the house and for the siblings both to sail away and start a new life.

As Tommy makes her escape from the house, the younger children try to stop her as they know their mother will be angry if the free governess leaves. The children call their father on the telephone and demand that he come home at once for an emergency. When the father reaches the area around the home, he finds Bob and Tommy leaving the house. He does NOTHING to stop them but bids them godspeed and farewell in his heart. He then returns to his office, knowing that he will probably never see his older children again. We do not read anything about how the she-dragon reacts when she returns home. All this is covered in the first eight chapters.

The last part of Chapter 8 includes Tommy running into a spot of bother near the Liverpool docks and being rescued by the Lintons who are also returning to Australia on the Nauru. She and Norah become very good friends on the journey to Australia. The route to Australia is not mentioned at all.

Chapter 9 starts with the arrival of the Nauru into Melbourne. The Lintons met up with relatives - David Lintons's brother Geoffrey and his family - for a few days before returning to Billabong.

Billabong is totally fictional. The local rail stop and township is called Cunjee, which is also fiuctional. Billabong is 17 miles from Cunjee. None of these names match any real name in Victoria and all we know is that Billabong and Cunjee are NORTH of Melbourne. Well, practically every place in Victoria is  north of Melbourne so that is adequately vague.

The Rainhams do the rounds of Melbourne with the letters of introduction that Bob had been given. And yes one of those letters was for the Lintons whom they met even before boarding the ship. They eventually arrive at Cunjee, three days after the Lintons do and Jim picks them up in the car. Over the next few months Bob and Tommy learn everything they need to know on how to run a farm. Bob does the outdoor work, and Tommy learns the indoor work. I know this is sexist, but that is just how things were done in those days. Watch the Man From Snowy River movies, and you will see the same thing. The women do the indoors work and the men ride around on the horses doing the outdoor work.

Bob eventually decides to raise sheep, as opposed to the Lintons raising cattle, so he buys a small farm and with Jim and Wally helping, they renovate the cottage, repaint the old house, make furniture and a working bee of neighbours build fences and plough the fields to get the crops started.

Meanwhile Tommy and Norah spend several weeks in the Cunjee hospital kitchens doing all the cooking for the patients who are dealing with the spanish flu. (Remember the Influenza epidemic of 1918-1919 that killed off many millions of people in Europe??).  Noone dies in Cunjee and life eventually returns to normal.

The Rainhams however are tested like never before. On New Years Day while everyone is at the races, their lovely little cottage gets burned down. The animals save themselves by standing in the creek, and Wally rides like the wind to bust into their cottage and save some mementos brought out from England while the cottage burns around him. There is nothing to do but tear down the old burnt building and start over again,. The new house goes up bigger and better than ever.

Also with extra money coming from an unexpected windfall from the aunt's legacy in England, Bob and Tommy are able to recover, pay off their debts and finally purchase some merino sheep and really become a sheep station, just like they dreamed about.

The list of Books in this series. The highlighted ones are those that I actually have saved as e-books 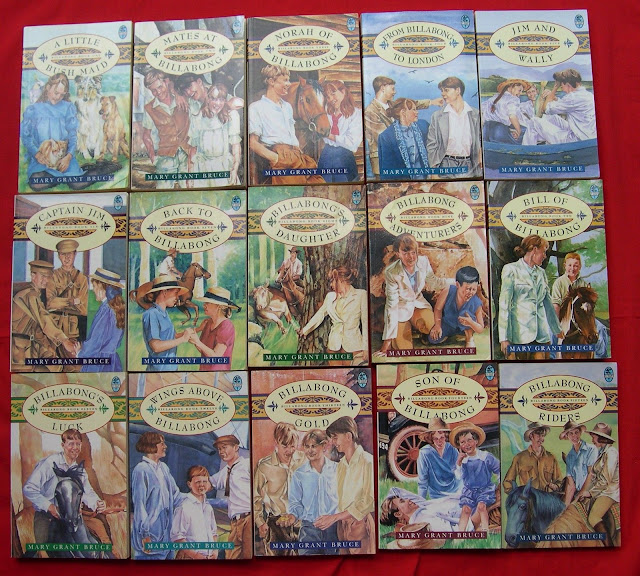 Posted by Francesca Thomas at 12:15 PM No comments: